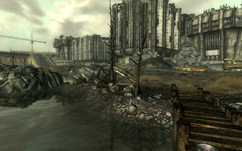 The scavenger's jetty is an unmarked location in the Capital Wasteland. It is south of Wilhelm's Wharf and west of the Anchorage Memorial.

It is a dock which contains the home of a scavenger. This makeshift home consists of an upside down boat leaning against a tree with a bed and a footlocker under the boat.

The scavenger's jetty appears only in Fallout 3.

Retrieved from "https://fallout.fandom.com/wiki/Scavenger%27s_jetty?oldid=3450375"
Community content is available under CC-BY-SA unless otherwise noted.