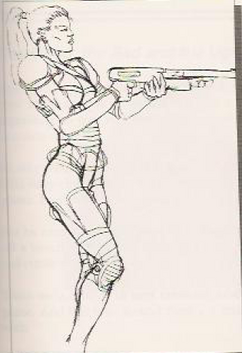 Scarlet was going to be one of the four playable characters in the canceled Fallout: Brotherhood of Steel 2.

Scarlet is described as an "albino hotty." She has pale, almost white skin, with thick white hair. She is five foot seven and has a body to die for. She dresses in red leather.

Because Scarlet was born an albino, her fellow citizens immediately left her out to die in the desert. An old mutant named Harold found her, and took her in. She traveled with him all over California, listening to his tales of adventure with the Vault Dweller. Finally, when she was old enough, she joined the Brotherhood of Steel, thinking that she would one day return to her birthplace and raze it to the ground. Her initial tests showed a certain... moral ambiguity that led her into the Brotherhood's special ops division. There she learned the art of snipers and stealth, and she became one of the best black ops the Brotherhood had ever seen.[1]

Scarlet can use all weapons in the game, but she has a disadvantage in each one. Her Stealth Skill does not work when handling big guns. She is proficient with rifles.[1]

Scarlet was to appear in Fallout: Brotherhood of Steel 2.

Retrieved from "https://fallout.fandom.com/wiki/Scarlet?oldid=3326709"
Community content is available under CC-BY-SA unless otherwise noted.