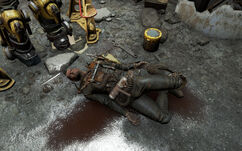 Scabby is a raider who invented horse power armor in the Commonwealth in 2287.

Scabby's lifeless body can be found on the ground level of the Wilson Atomatoys Corporate HQ in 2287. Scabby was part of a raider gang who used to operate in the Commonwealth. The gang eventually stumbled on the Atomatoys Corporate HQ and decided to use some of the parts there to repair their power armors. Scabby's journal reveals that he fell in love with one of the toys. When the other raiders discovered it they mocked him and destroyed the toys. Drunk with rage, Scabby used the remains of the toys to customize a raider power armor with Giddyup Buttercup parts, create the horse power armor and slaughter his former gang.

Retrieved from "https://fallout.fandom.com/wiki/Scabby?oldid=3057462"
Community content is available under CC-BY-SA unless otherwise noted.