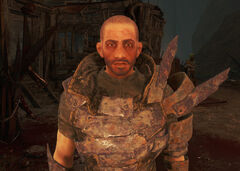 Savoy without his mask

“I could really go for killing someone right about now.”

Savoy is a member of the Disciples in Nuka-World in 2287.

Savoy is a high-ranking member of the Disciples and one of Nisha's top enforcers.[1] In a gang centered around violence and backstabbing, Savoy is notable for his unfailing loyalty to Nisha.[1] When interacted with, he speaks almost exclusively about his eagerness for his next kill.[2]

Mags Black once attempted to sway him into becoming an informant for the Operators by sending one of her girls to seduce him. When that failed, she assumed Savoy to be gay and sent a male Operator, which met with failure as well. She then concluded that Savoy only had eyes for someone he was working for or with and refrained from trying again.[1]

Savoy appears only in the Fallout 4 add-on Nuka-World.