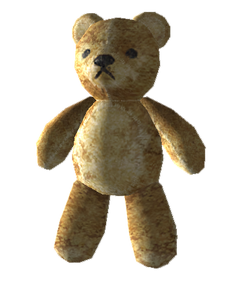 “Antony took Sergeant Teddy away and gave him to the stinky dogs. I want him back!”— Melody

Saving (or Savaging) Sergeant Teddy[1] is an unmarked quest in Fallout: New Vegas.

Retrieved from "https://fallout.fandom.com/wiki/Saving_(or_Savaging)_Sergeant_Teddy?oldid=3410371"
Community content is available under CC-BY-SA unless otherwise noted.
... more about "Saving (or Savaging) Sergeant Teddy"
RDF feed
Has platform
Xbox 360 +  and PC +