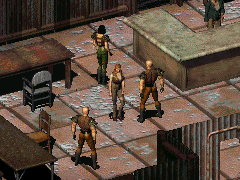 “Hey, thanks for helping me out when those Skulz jumped me. There aren't many people willing to do that sort of thing these days.”— Trish

Save Trish is a cut quest in Fallout.

In the quest, the Vault Dweller was originally meant to save Trish, a waitress of Skum Pitt from the Skulz gang members. If they are present in the Skum Pitt between 4 and 6 o'clock, the gangers appear around and surround Trish. After a chat with Neal, the Skum Pitt owner, one of the gangers will punch Trish. Afterward, Neal will kill the Skulz member that was attacking Trish. Trish will scream Saul's name, which leads to the quest, Help Saul.

Originally Neal's killing of the attacking ganger was meant to trigger a fight and Trish thanking the Vault Dweller after they dealt with the Skulz, however in-game the Skulz peacefully walk away. The quest was originally meant to lead to Help Saul.[1]

The quest cannot be received in-game, as such, no XP or thanks from Trish will be given regardless of whether the Skulz ganger is killed or from Neal shooting the attacker. Instead of a fight being triggered, the gangers will simply walk away after Neal kills one of them.

Retrieved from "https://fallout.fandom.com/wiki/Save_Trish?oldid=3345587"
Community content is available under CC-BY-SA unless otherwise noted.