Occurs after conversation with Killian Darkwater

400 XP
+2, +3, or -1 Reputation
“Listen. Thanks for saving my life. It's a mighty brave thing to do. Looks like we got ourselves a situation here. I know Gizmo's behind this, but I need proof. You interested in helpin'?”— Killian Darkwater

Save Killian's life is an unmarked quest in Fallout.

In the Crash House area of Junktown, go to the Darkwaters General Store. Talk to Killian Darkwater. Kenji will step in and attempt to assassinate Killian shortly thereafter. If the Vault Dweller intervenes to protect Killian, it will open up the Get Gizmo's confession quest, which the Vault Dweller can accept or refuse.

Kenji will appear in Killian Darkwater's store the first time dialogue with Killian ends, unless already having been hired by Gizmo beforehand. In that case, Kenji will not appear, as the player character is the assassin. 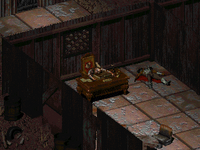