“You want a superheated Saturnite Power Fist? I can hook that shit up!”— Toaster

The Saturnite alloy research facility is a location in the southwest of the Big MT in 2281. It is located southeast of the Z-43 innovative toxins plant and is a factory based on top of a cave system where there is an exposed lava flow.

Saturnite retains heat to the point where a blade forged from it can be used to melt metal. This factory utilized the lava within for such research.

The building is full of crazed Mister Handy robots, along with one unique Mister Handy by the name of Sparks.

Upon entering the eastern entrance, is a standard lobby with a few desks and computers that leads to the main factory floor. In front of the first desk, is a box of Mentats, with a Sunset Sarsaparilla vending machine nearby. This floor has a southern exit, as well as a set of stairs that lead up to a small tunnel system. There is a part of the rail that can be jumped over, in which there is a pipe to land on, which when walked across, leads to a toolbox containing assorted chems.

The tunnels lead to a cave system with more stairs, that eventually lead down into the main cave. The main cave, as well as Sparks, however, are protected by a force field, so a sonic emitter will be required to progress further in.

Saturnite bars on floor of the facility 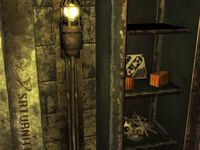