Saturnite is a space-age, metallic-ceramic alloy developed at Big MT for use in a variety of fields.

Saturnite was used in the production of cosmic knives (which were marketed as the World's Sharpest Edge),[1] the D-25A power fist, experimental armor plating,[2] and artillery shells.[3]

The building housing the corporation that owned and distributed Saturnite-brand cosmic knives was located in Ashton. However, after the War, as the Divide was born, the building collapsed into the newly formed fissure.

“The alloy that makes up the Pre-War kitchen knives is unknown, and seems to have decayed in contact with the toxic cloud.”— Loading screen, Dead Money

Saturnite has a few unique characteristics such as its uncanny sharpness, its ability to hold an edge, and its ability to retain heat for extended periods of time.[4][5] Like other ceramics, it has a very high strength-to-weight ratio.[6] 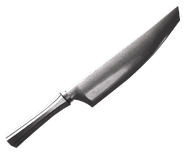 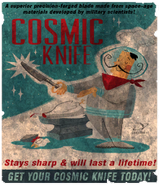 Advertisement for cosmic knives
Add an image to this gallery

Retrieved from "https://fallout.fandom.com/wiki/Saturnite?oldid=3153678"
Community content is available under CC-BY-SA unless otherwise noted.