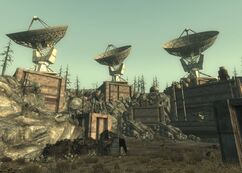 “We isolated the transmissions and found their origin point; an old military installation in Rockland, to the southwest.”— Scribe Rothchild

The satellite relay station is a large building inhabited by Enclave troops and some robots reached through the Rockland car tunnel. It has one interior section.

The Enclave used the satellite station to aim their orbital bombardments.

The exterior is a small valley stretching from north to south. The collapsed end of Rockland car tunnel and the door through which the area is accessed is at the southern end while the satellite relay station itself and another collapsed car tunnel are at the northern one. The valley itself is split into an elevated road on the eastern side and a wider grass area to the west. The road is initially blocked by Enclave force-fields and the whole area is fortified with automated turrets. 20 Enclave soldiers protect the area.

The facility itself is a fairly extensive, yet linear building spanning across multiple floors and guarded by 24 Enclave soldiers in total. The first room encountered when entering the facility itself is filled with rubble. The only way further inside the building is a small service tunnel with a small locker room on the side which ends in a room with generators, computers and a metal staircase leading upwards. While the intermediary level holds nothing of interest, the topmost level has a room with some tables and more computers on the one side and a small corridor on the other. After passing by yet another computer room, the corridor ends in another staircase, this time leading downwards. At the bottom level, there is a storage room or lounge connected to another service tunnel. Featuring a lot of crates and a barricade, the tunnel opens out into a room with pipes on its floor. Yet another metal staircase leads to a room with microfiche readers and more computers with a small bathroom on the side. A large door at the end reveals the next service tunnel which is fairly short and ends in a computer room with a Satellite Uplink terminal. Stairs guarded by an automated turret lead to the building's other exit to the Capital Wasteland, up a cliff north of Rockland car tunnel.

The satellite relay station appears only in the Fallout 3 add-on Broken Steel. 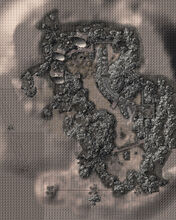 Satellite relay station map
Add an image to this gallery
Retrieved from "https://fallout.fandom.com/wiki/Satellite_relay_station?oldid=2911437"
Community content is available under CC-BY-SA unless otherwise noted.