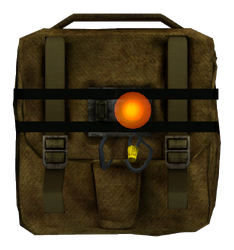 The satchel charge is a weapon in the Fallout: New Vegas add-on Lonesome Road.

The satchel charge is a placed explosive, and functions like other land mines. However, it has a significantly shorter fuse than other types. Even player characters with a very high Explosives skill will set off enemy-placed charges almost immediately. It has a relatively large proximity detection, and disarming is often difficult as a result.

It is deceptively powerful for the simplicity of its construction, besting even the bottlecap mine, often crippling a limb upon detonation if one gets caught in the blast. The satchel charge also bests the bottlecap mine by being far easier to craft and using far more common materials. This is offset by higher Strength and skill requirements, as well as weight.

This weapon can be crafted by the Courier.

The satchel charge was supposed to be weaker, with a longer fuse. According to Joshua Sawyer, the damage was doubled and the fuse was shortened in the last week of development.[Non-canon 1]

An Average locked box and an open box at Bonesaw's location

Near the Third Street Municipal Building