The exterior of the SatCom array is secured by two to three Enclave soldiers, an Enclave officer, and on higher levels, an Enclave sentry bot. The interior, however, contains no significant threat; three to four fleeing Enclave scientists will be encountered, and a pile of ghoul wastelander corpses will be directly in front of a furnace to the left of the entrance. Up the first ladder will be one more Enclave soldier on the scaffolding, while climbing the second ladder onto the dish will initiate a sequence where two Enclave vertibirds fly harmlessly overhead.

Note that if the main questline hasn't advanced far enough yet, there will only be a single Enclave soldier outside the facility, who may not appear until after exiting onto the exterior scaffolding. The inside will be unoccupied (though an Enclave communications array will still be located inside), and no vertibirds will fly overhead.

Enclave camp after The Waters of Life 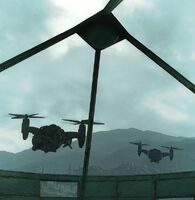