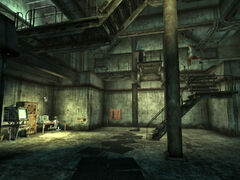 Satellite Facility, with the ghoul scientist on the run

SatCom array NW-05a is a satellite communications array, part of the SatCom arrays in the northwest of the Capital Wasteland in 2277. It is located further west of NN-03d, between Fort Constantine and the MDPL-05 power station.

NW-05a is populated by members of the Talon Company and a ghoul scientist.

The SatCom array's interior opens into a large room with a staircase that leads up to a second floor with a workbench with a bottlecap mine on it. The stairs also lead to a small alcove with a ladder. Climbing the ladder will lead to the satellite dish at the top of the array.

The SatCom Array NW-05a appears only in Fallout 3.

Raider wharf near the SatCom array

Bottlecap mine
Add a photo to this gallery
Retrieved from "https://fallout.fandom.com/wiki/SatCom_Array_NW-05a?oldid=3389055"
Community content is available under CC-BY-SA unless otherwise noted.