SatCom array NN-03d is a satellite communications array, part of the SatCom arrays in the northwest of the Capital Wasteland in 2277. It is located between Fort Constantine and the MDPL-21 power station.

NN-03d consists of three satellite dish arrays and is occupied by a force of raiders. The structures of this location are also home to several "Easter eggs." The raiders occupying the SatCom array respawn after 72 hours.

Array NN-03d-A and C can be entered from the ground level; B's front door is boarded up. A's entry point has a heavy population of raiders. Arrays A and B are connected by a bridge on top of the dishes. There are holes to watch out for and raiders on the outsides of arrays B and C. Arrays B and C are connected by a basement. Array C is locked but can be opened with the nearby terminal (very easy). The view on top of C is breathtaking, but don't miss the two mini nukes on the arms of the "scarecrow" setup on the edge of the satellite dish.

Balanced on the railing of the walkway leading to the chessboard, you will find a carefully arranged array of sporks. Taking or moving any of the sporks, or even walking too close to them, will cause the arrangement to crumble, with some falling onto the walkway and some all the way to the floor below. NN-03d-B contains the giant teddy bear behind the boarded-up hall behind the chemistry set on the ground floor. The door behind the teddy bear doesn't lead anywhere.

To the northeast of the towers is a small doorway set into the rock. When opened, the door reveals a concrete wall with the words "FUCK YOU" written on it in big green letters. On top of that door are three missiles, which are, mysteriously, balancing on the very tip of the warheads. There are also two empty burial mounds outside one of the SatComs.

The SatCom Array NN-03d appears only in Fallout 3.

The green "FUCK YOU" graffiti found at this location uses the handwriting of world artist Nathan Purkeypile.[1] 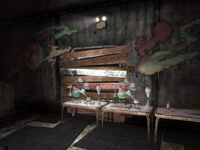 Location of the bear 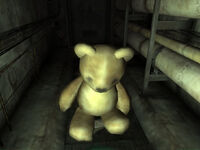 Sporks balancing on the railing

Coffins standing in the C-tower

Close-up of a coffin with a skeleton in it

Large amount of empty whiskey bottles in the C-tower

"Fuck You" graffiti hidden behind a fake door