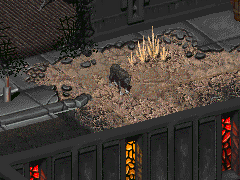 Sasha can be seen waiting patiently for her master at the back of the Cathedral. It is unknown if the dog survived the destruction of the Cathedral, though Chris Taylor confirms that it is unlikely.

Many years later, drug addicts in New Reno sometimes ask: "Sasha? Where are you Sasha?".

Sasha appears only in Fallout and is mentioned in the Fallout Bible.

According to David Hendee:

Sasha is the name of one of Interplay's old producers, Vince Denardo. He did not work on Fallout 1 or 2. It was a bit of tradition to have his dog somewhere in an Interplay game, in some shape or form. Sasha is normally placed in the special thanks section or some other place in most of our older manuals."

According to Chris Taylor:

Speaking of Vince, we liked him so much we placed his dog Sasha in the game. We tried to put her somewhere players could see but not get to, because we were afraid they'd try to kill it. We picked the Military Base... which gets nuked. Oops!

Retrieved from "https://fallout.fandom.com/wiki/Sasha?oldid=3366324"
Community content is available under CC-BY-SA unless otherwise noted.