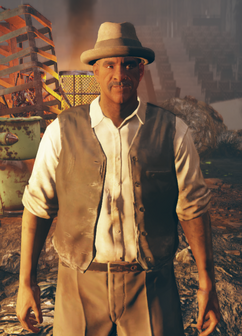 Sargento is the leader of an independent gang of raiders who deal in slavery and hold fighting tournaments in Appalachia in 2103.

Sargento and his gang operated in the Capital Wasteland at one time.[1] As of 2103, they have set up shop in the Watoga Civic Center, and run a fighting arena where they pit slaves against dangerous creatures. Johnny Weston describes Sargento as a "two-bit wanna-be Roman emperor"[2] and a "sick bastard." However, he also never goes back on a deal and stays committed.[3]

Sargento also wants to keep his clientele at the arena entertained, to the point of suggesting ridiculous or overly vague themes. He leaves notes for Carl Madeiros, a technician in the gang, with ideas for new match types. One of Sargento's suggestions was simply "chainsaws." When asked what this meant, Sargento only replied "Chainsaws! You know, grgzgzghghgh pow! Make it happen!"[4][5]

Sargento has a long scar along his right eye.

Sargento appears only in Fallout 76, introduced in the Wastelanders update.

Retrieved from "https://fallout.fandom.com/wiki/Sargento?oldid=3298917"
Community content is available under CC-BY-SA unless otherwise noted.