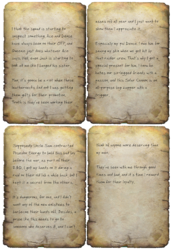 In Ace's safe, found under a bridge directly southwest of D.B. Technical High School during Burned on the River.

I think the squad is starting to suspect something. Ace and Deuce have always been on their OFP, and Queenie just does whatever Ace says. Hell, even Jack is starting to look at me like I banged his sister.

Man, it's gonna be a riot when those leathernecks find out I was getting them gifts for their promotion. Truth is they've been working their asses off all year and I just want to show them I appreciate it.

Especially my pal Deuce. I owe him for saving my skin when we got hit by that raider crew. That's why I got a special present for him. I know he hates our six-legged friends with a passion, and this Solar Cannon is an all-purpose bug zapper with a trigger.

Supposedly Uncle Sam contracted Poseidon Energy to build this bad boy before the war, as part of their R&D. I got my hands on it during a raid on their old lab a while back, but I kept it a secret from the others.

It's dangerous, for one, and I didn't want any of the new enlistees to barbecue their hands off. Besides, a prize like this needs to go to someone who deserves it, and I can't think of anyone more deserving than my men.

They've been with me through good times and bad, and it's time I reward them for their loyalty.

Retrieved from "https://fallout.fandom.com/wiki/Sarge%27s_note?oldid=3399125"
Community content is available under CC-BY-SA unless otherwise noted.