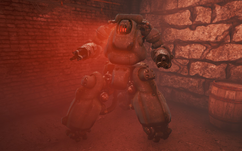 Sarge is a sentry bot in the Castle tunnels in 2287.

Sarge is a standard Mk II sentry bot equipped with dual miniguns. He was used by the Minutemen for a long time to guard their main base of operations, The Castle, until a colony of mirelurks forced them out in 2240,[1] abandoning Sarge in the Castle tunnels. After retaking The Castle the Sole Survivor heads into tunnels with Ronnie Shaw to find a way to get into the West Bastion in search of additional weapons. Sarge is still active and hostile to any intruders, including the Sole Survivor and Ronnie Shaw (due to his IFF database being corrupted). Ronnie Shaw makes note of his demise, saying that it's a shame that they had to destroy him. Due to the nature of the close quarters, fighting him can be difficult.

Sarge firing his arm's chainguns.
Add an image to this gallery

Retrieved from "https://fallout.fandom.com/wiki/Sarge?oldid=3172115"
Community content is available under CC-BY-SA unless otherwise noted.