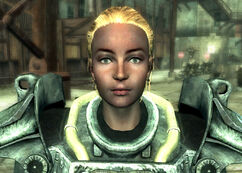 Following in His Footsteps
The Waters of Life
The American Dream
Take it Back!
Who Dares Wins

(during Take it Back!) (Lyons' Pride power armor)

“We've still got the damn Frankensteins crawling all over D.C. and Rothchild's got us picking up every blinking gizmo from here to Virginia.”

Sentinel Sarah Lyons (2251–2278) is a high-ranking Brotherhood of Steel officer and the commander of the elite Lyons' Pride squad in 2277. She became elder upon the death of her father, Owyn Lyons, but was subsequently killed in action.[1]

Sarah Lyons was born in 2251 in the Brotherhood of Steel's Lost Hills bunker in California. In 2254, the Brotherhood of Steel ruling council decided to send a contingent of soldiers under the command of Star Paladin Owyn Lyons to the East Coast with a mandate to recover all advanced technology from the Washington, D.C. area. Three at the time, Sarah joined her father on his journey east to the Capital Wasteland (her mother having died several years earlier). Since their arrival and establishment of a permanent base at the Citadel, Sarah trained to be a warrior.

By 2277, Elder Lyons' daughter Sarah is a grown woman and one of the Brotherhood's finest warriors. Brotherhood through and through, she is as dedicated and decorated as her father when he was younger. In fact, she’s the only member to have achieved the illustrious rank of sentinel, and now commands her own elite squad, Lyons' Pride.[2]

Sarah Lyons routinely went on routing super mutants from their various raiding posts in the Capital Wasteland and would later help the Lone Wanderer defeat the Enclave during the Battle of Project Purity, storming the purifier at the head of Lyons' Pride and just behind Liberty Prime.

Sarah is loyal to her father, but her superior attitude to wastelanders is more typical of those in the Brotherhood with lingering sympathies for the Outcasts. She has little patience with "civilians" stumbling into the line of fire. Her attitude towards Initiate Reddin suggests she is not convinced that wastelanders should be recruited into Brotherhood ranks.

Sarah Lyons appears in Fallout 3 and its add-on Broken Steel, as well as a legendary dweller in Fallout Shelter. She is also mentioned in Fallout 4.

Fallout 3 Faction Profile – the Brotherhood of Steel by Emil Pagliarulo.

Sarah, after the fight at GNR building plaza

Ending slides of Sarah activating Project Purity! during Take it Back!

Sarah's base statistics in Fallout Shelter

Retrieved from "https://fallout.fandom.com/wiki/Sarah_Lyons?oldid=3461562"
Community content is available under CC-BY-SA unless otherwise noted.