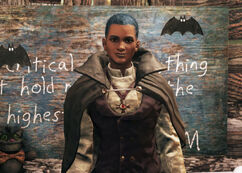 Sara Matthews is a resident of The Retreat in 2103.

Sara joined the villagers of the Retreat because living in the treehouses there made her feel like "some sort of a fantasy character" and is able to be who she wants to be,[1] regardless of what other people think.[2]

Sara views the Crater raiders rather highly, and even visits them occasionally.[1] However, she views the Brotherhood of Steel poorly, mainly on account of their name - she believes they should have picked a better word than "Steel" to describe themselves as it is "cool and all, but kinda lame, right?"[3]

Sara Matthews appears only in Fallout 76, introduced in the Steel Dawn update.

Retrieved from "https://fallout.fandom.com/wiki/Sara_Matthews?oldid=3475520"
Community content is available under CC-BY-SA unless otherwise noted.