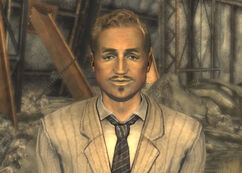 “It is a dream come true. Santiago never thought he could work in such a wonderous den of vice and iniquity.”

Santiago is a character living in Freeside in 2281.

Santiago is a smooth-talking con artist living in Freeside. He has a Spanish accent and uses it to get out of paying for drinks. Thanks to his dishonest ways, he owes Francine Garret 212 caps and has no intention of paying them back before being confronted by the Courier in the side quest Debt Collector.

Recruiting Old Ben to satisfy the "Suave Talker" requirement of the quest Wang Dang Atomic Tango will make it impossible to collect the debt from Santiago through dialogue. Attempting to collect the debt will simply result in a selection of dialogue options where the Courier has no choice but to pay Santiago for his bogus discount password to Mick & Ralph's. [verified]

Santiago, ready to service customers in the Atomic Wrangler Casino
Add a photo to this gallery
Retrieved from "https://fallout.fandom.com/wiki/Santiago?oldid=3403739"
Community content is available under CC-BY-SA unless otherwise noted.
... more about "Santiago"
RDF feed
Has platform
PC +, Playstation 3 +  and Xbox 360 +