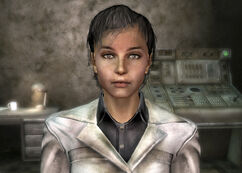 “Believe it or not, she's both. My daughter appears to have a naturally acquired immunity to any form of mutation. Basically, she won't turn into one of the Trogs. Or a Ghoul, or anything else. And by studying her, we can keep that from happening to others, too.”

Dr. Sandra Kundanika is a Pitt raider scientist in The Pitt in 2277.

Sandra is one of the few Pitt raiders with a solid education, and she deliberately approached the Pitt because she saw it as a strong up-and-coming force in the wasteland. Ashur recognized her intelligence immediately and offered to support her work. Sandra's friendly demeanor hides a fierce intelligence and absolute conviction. Sandra has no illusions about the cutthroat nature of the Pitt's raiders. In fact, she shares a good deal of their ruthlessness, although she prefers to avoid direct violence, if possible. She wholeheartedly supports Ashur's plans to build an army and unite the wasteland.[1]

She is tasked with finding a cure for the Troglodyte Degeneration Contagion (TDC).

Sandra is married to Ishmael Ashur. Together they have a daughter, Marie.

She spends her day in the back of the Haven's top floor researching a cure for Troglodyte Degeneration Contagion (TDC).

Stealing from her results in bad Karma.

Sandra Kundanika appears only in the Fallout 3 add-on The Pitt.

Retrieved from "https://fallout.fandom.com/wiki/Sandra_Kundanika?oldid=3433289"
Community content is available under CC-BY-SA unless otherwise noted.