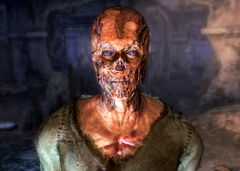 Sanders is a ghoul who is found dead in 2277 in Old Olney underground.

Sanders knew better than most. He was always telling Roy Phillips how his delusions of grandeur were misplaced, and that ghouls should set up their own settlement, away from those who would seek to destroy their way of life. After gathering a plucky band of likeminded souls, Sanders ignored Connelly's whining, and trekked northward to a relatively undisturbed township called Old Olney. Once there, Sanders was amazed to dicover that the place hadn't been settled by raiders. His crew headed into the maze of sewers and tunnels under Old Olney, and began to set up a makeshift camp. It had everything one could wish for; food, beer, a pool table... and an odd scratching sound coupled with distant roaring. This roaring intensified as Sanders suddenly - and violently - discovered his group wasn't the first to settle in Old Olney.[1]

By the time the Lone Wanderer reaches him, Sanders had been killed by deathclaws.

Sanders appears only in the Fallout 3 add-on Broken Steel.