The House of Tomorrow
Root cellar

Sanctuary Hills, often referred to as Sanctuary, is a location and settlement in the Commonwealth in 2287.

Built sometime in the 2070s, Sanctuary Hills was a friendly suburb of Concord, located on a small island about a mile north of the town and accessible only by a wooden bridge, consisting of 14 prefabricated homes. Before the Great War Sanctuary Hills was the home of the Sole Survivor, who lived in the House of Tomorrow with their spouse Nate/Nora, their son Shaun, and their robot butler Codsworth.

On Saturday October 23rd, 2077, many families were just beginning their weekend mornings when their radios and television sets began reporting nuclear detonations in New York and Pennsylvania at 9:42 am. At 9:47 am, Boston was hit by one atomic warhead, and Sanctuary Hills was hit by the subsequent atomic blast seconds later. Select citizens that had spaces reserved fled to Vault 111, just through the woods surrounding the community, to escape the atomic fire. After the war Sanctuary Hills was largely left to decay, with several of the original homes collapsing and the others falling in to various states of disrepair. It's only residents during the post war era were radroaches, bloatflies, Codsworth, and the Vault-Tec rep for a very short period of time. Upon return to the town following cryogenic statis, Sancturary Hills will often become the first settlement in The Commonwealth to fall under the Sole Survivor's control.

The ruins of the development became a prospective settlement for the survivors of the Quincy Massacre, led by Preston Garvey, who are trapped in the nearby Museum of Freedom in Concord. After the quest When Freedom Calls, Sanctuary Hills becomes the first new Commonwealth Minutemen settlement after their destruction at Quincy.

The settlement is equipped with the pre-existing crafting stations:

Sanctuary Hills is accessible by a small footbridge from Vault 111 and original main road over the larger bridge crossing the nearby river, leading to Concord, via the Red Rocket fueling station. The village itself is built along a single road, which ends in a cul-de-sac. The site is populated by several houses which, by 2287, are in various states of decay. To the west of Sanctuary Hills the Misty Lake is located and is the source to the two rivers surrounding the small island of Sanctuary Hills.

There are multiple safes and lootable items to be found in Sanctuary. Starting from the bridge leading out of the community, there is a floor safe (Advanced) hidden under a dresser in the blue house to the north of the road. In the yellow house at the curve of the street, there is a terminal (Novice) and a safe (Novice) with a makeshift bomb on the top and tension trigger affixed to the left hand side. In the blue house next to the yellow one is a Nuka-Cherry in the fridge, a first aid box in the bathroom and a locked suitcase (Novice) in the bedroom. In the Sole Survivor's house, the player character can find an issue of Grognak the Barbarian on the kitchen table and the "You're SPECIAL!" book under the dresser in Shaun's room. There is a safe (Advanced) in the house following the Sole Survior's and a root cellar around the back of the of the following house down the street; just before the roundabout, containing multiple items and a locked safe (Advanced). The house south of the roundabout has a floor safe hidden under the baby bed.

The root cellar is a shelter built under a neighboring property, two houses up from the House of Tomorrow in 2287. It appears that the owner was not able to reserve a space in a vault and so made his own shelter. The door can be found at the back of the house, just before the cul-de-sac in the northeast of Sanctuary Hills. It is next to a bush of wild mutfruit plants. There is a dufflebag containing leveled loot on the roof of the same house, accessible via the fallen tree to the rear of the house.

The House of Tomorrow

Sanctuary Hills appears only in Fallout 4.

Sanctuary Hills appears to be set in the same location as the real-world Minute Man National Historical Park, as both are located northwest of Concord across what appears to be the Concord River, the bridge used to access Sanctuary in-game is nearly identical to the real-life Old North Bridge[1], and the location's map-marker bears a resemblance to the Minute Man statue adjacent to the bridge in real-life (Sanctuary also has a Minute Man statue, albeit adjacent to the wrong side of the bridge).

The houses in Sanctuary Hills are based on the real-world Lustron prefabricated houses, constructed after World War II in response to the shortage of housing for returning G.I.s.

You're SPECIAL! book in pre-War Sanctuary 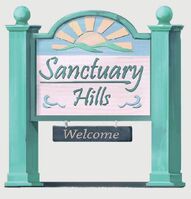 Welcome sign art
Add an image to this gallery

Retrieved from "https://fallout.fandom.com/wiki/Sanctuary_Hills?oldid=2693527"
Community content is available under CC-BY-SA unless otherwise noted.