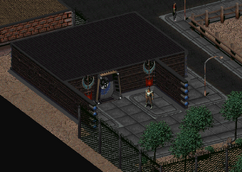 Get the vertibird plans for the Brotherhood of Steel

Access to the bunker is granted by Matthew upon successful retrieval of the vertibird plans from Navarro for the Brotherhood of Steel. If the Chosen One has obtained the plans, they will find an impressive amount of loot within the bunker and may also wish to make use of the ACE computer to boost their SPECIAL stats.

Enhancing the SPECIAL stats requires the memory modules in order to use: blue for Charisma, green for Perception, yellow for Intelligence and red for Strength.

The San Francisco Brotherhood outpost appears only in Fallout 2.

Add an image to this gallery
Retrieved from "https://fallout.fandom.com/wiki/San_Francisco_Brotherhood_outpost?oldid=3326768"
Community content is available under CC-BY-SA unless otherwise noted.