Play sound
Many Contrasts.ogg
“San Francisco was hit hard by nukes, but it didn't kill the city. Instead it just mutated it into something a bit weirder. You'll have to make your way past an oddly revived Chinatown, post-nuke punks, and a bizarre group of cultists called Hubologists. Hmm, maybe San Francisco hasn't changed all that much.”— Fallout 2 Official Strategies & Secrets

San Francisco is a city in California. After the Great War, its population consists mostly of the Shi, who are the descendants of the crew of a Chinese submarine that crashed there, and of the members of a religious cult known as the Hubologists.

Even pre-War, San Francisco was considered a "weird" city.[Non-canon 1] It was also evidently hit hard during the Great War, as much of the city is a ruin. The city was re-founded after the war by Chinese submariners that drifted into the San Francisco harbor after their submarine, the Shih-huang-ti, suffered system failure from the atomic war. The Shi climbed out and began rebuilding the city with what few survivors they had, scrapping their beached submarine to create their Steel Palace.[1][2]

Over the next 150 years, San Francisco rose into a hub of technology. The Shi descendants are currently working on a project that will change the world, while the local cult, the Hubologists, are also working on a project, though theirs is more centered on leaving this world rather than changing it.[3] In addition to these opposing factions, it is said that two opposing fighters in San Francisco, the Dragon, who loves others, and Lo Pan, who loves himself, will determine the future of martial arts.[3] Another useful Shi is Lao Chou who seems to know everything that's happening in San Francisco.

The PMV Valdez can be found here, an aged oil tanker left sitting at the docks. Tanker vagrants have since come to call it home, but the tanker has a darker past. Some say the creatures within it, (wanamingos, floaters, and centaurs), were placed there by the Enclave to prevent the tanker from being used to get to their oil rig headquarters.[3] This is supported by the fact that essential components needed to make use of the ship have been relocated to Navarro and Vault 13. However, it is apparent that these steps were not enough, as the Chosen One later collects the parts and uses the tanker to get to Control station Enclave.

The Shi eventually went into an uneasy trading relationship with the tanker vagrants after the destruction of the Hubologists, and the two groups went on to make San Francisco a major fishing and trading center.[Non-canon 2]

However, shortly after the destruction of Control station Enclave, Enclave survivors from the Navarro base and elsewhere turned the majority of their remaining nuclear arsenal against the port city, wiping it off the map under the assumption that the inhabitants had been the ones who nuked the oil rig and assassinated the President of the Enclave.[Non-canon 3]

San Francisco can be found six squares east and 24 squares south of Arroyo.

Also called Shi-town, a location in San Francisco. Once a suburb of the great city, it has been adopted by the descendants of the Shih-huang-ti crew, who have lived in the red brick houses ever since. In 2241, it's the heart of the city and a focal point for the Shi's internal struggles.

Notable establishments in the district include Red 888 Guns weapons shop, Lao Chou's Flying Dragon 8 general store, Dr. Fung's clinic and the gyms of Dragon and Lo Pan as well as passages to the Golden Gate, Shi-town Docks and the Steel Palace. Off the radar is a pre-War military station, currently controlled by the Brotherhood of Steel, manned by a single soldier named Matthew.

The Steel Palace is the main base of the Shi, Chinese inhabitants of San Francisco. It is a small, reinforced structure, protected by heavily armed guards (H&K G11s and M72 Gauss rifles are common), lies the Emperor mainframe (also a relic from the submarine) that records and analyzes the history of the faction, advising Ken Lee.

The docks support a population of slags as well as Shi children. It is not a terribly healthy place to live, judging by the rust-brown color of the water surrounding the ancient and corroding PMV Valdez.

For the most part, the city's population is made up of the Shi, the descendants of Chinese submarine crewmen that were beached in San Francisco shortly after the Great War. By 2242, the Shi became a major research and development house, one that stayed out of wasteland politics. They are ruled over by an emperor, but his head adviser actually handles Shi affairs.

The Hubologists, a cult focused on the pre-War "teachings" of Dick Hubbell also call the city home and have secured a pre-War USS Quetzel, which they intend to repair and use to leave Earth, by launching it using the now-ruined Golden Gate Bridge as a launch platform. The shuttle itself was found at San Francisco International Airport and was likely involved in a scrapped plan to transport Enclave personnel off-planet to escape the War.

The group promotes the idea that humans are plagued by the spirits, or 'neurodynes' of the dead. Through a 'cleansing' process offered at Hubology centers called 'alignment', members can remove these negative influences and gain greater powers.

These vagrants are a diverse collective of solitary wanderers, social outcasts and survivalists from across the wasteland that immigrated to San Francisco for the tolerance and respect for secrecy there. They eventually occupied the deck of the abandoned tanker, forcing the creatures that inhabited it to remain in the holds.

Relationships with other settlements

It is well-known city in the south, which trades fish to other cities in the wasteland.[Non-canon 4] During 2241, the New California Republic had no influence in San Francisco, and the Shi are quite happy to keep it that way and the Hubologists don't concern themselves with such things.

There are few foreigners in San Francisco and newcomers are easily noticed. Due to its location in between the military base, Navarro, and a desolate expanse of wasteland, it is logical to assume that few (but well-armed) caravans traverse these paths. Remnants of the Master's army, Enclave patrols, press gangs, Hubologists, and mutated animals plague the surrounding area making it inaccessible to weak or crudely armed travelers. Lao Chou mentions the Enclave flew over San Francisco from the north and out to sea.[4]

In the Commonwealth, a high value brand of cigar can be found called San Francisco Sunlights.

San Francisco appears only in Fallout 2. Its aquarium is mentioned in the Fallout 3 add-on Broken Steel. The city's Golden Gate Bridge appears in the Atomic Command game in Fallout 4, and through Kellogg's memories, as the Golden Gate is seen out of the window. It is also mentioned in Fallout 76 as part of the Patriotism Training at Camp McClintock,[5] as well as in the update Wild Appalachia.[6] The city was also going to be mentioned in Van Buren.

Pressing 5 at the San Francisco map will bring the Chosen One to a location with an "UNUSED ART" room - shuttle interior. Attempting to examine certain things will allow the player character only to see a shuttle wall. There is no way to exit out of this area other than using an earlier save.[verified]

Location in the 1998 press pack 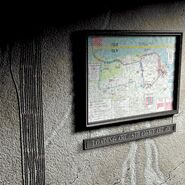 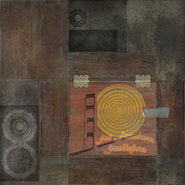