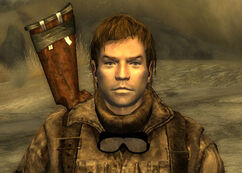 Samuel Kerr is a trader running the 188 trading post with his daughter Michelle Kerr in 2281.

Samuel Kerr is a trader from Primm that who set up the 188 trading post with his daughter Michelle Kerr after Powder Gangers raided the town. He takes turns with his daughter sleeping on the mattress behind the bar. Samuel serves drinks and offers repair services.

Samuel and Michelle Kerr share caps and inventory. However, they will only sell certain item categories from that inventory. Samuel only sells aid, and Michelle also sells ammo but not alcohol. Neither sells miscellaneous items. Also, caps accumulated via Samuel repairing items are tabulated separately from Michelle's caps on hand.

Samuel Kerr may begin a "drinking whiskey" animation while simultaneously talking to the Courier.

Retrieved from "https://fallout.fandom.com/wiki/Samuel_Kerr?oldid=3233718"
Community content is available under CC-BY-SA unless otherwise noted.