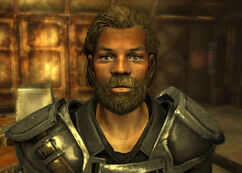 “A beautiful thing. Saved a little blast powder here, hid a makeshift weapon there, and one day I orchestrated a little symphony for the NCR.”

Samuel Cooke is an anti-NCR revolutionary and the original leader of the Powder Gangers prisoner uprising, now operating with a small group of escaped convict followers out of Vault 19 in the Mojave Wasteland in 2281.

Samuel Cooke is a unique character among NCR convicts. His hatred of the Republic is motivated by politics, as he sees the NCR as a corrupt, imperialist, tyrannical beast that forces its system on every man, woman, and child in the wasteland.[1] His revolutionary zeal led him to wage a campaign of sabotage in New California, blowing up NCR caravans along Interstate 15. Although genuinely passionate about his cause, he was still only one man and was eventually captured.[2]

Cooke's sentence landed him in the NCR Correctional Facility in the Mojave Wasteland. However, incarceration did nothing to extinguish the fire in his heart. Although he acted like a model prisoner, with only being anti-NCR,[3] together with a band of trusted inmates, Samuel secreted away small quantities of explosives used in railroad construction. Easy, considering Cooke was part of the chain gangs that labored away under the sweltering sun, clearing the way for NCR trains.[4]

Eventually, Cooke saw an opportunity. When the Republic redeployed another group of prison guards away to the Colorado, he and his men blasted their way out of the cell block, overwhelmed the guards, and earned their freedom. The rest of the prisoners joined in when they realized what happened. However, Cooke left the prison together with a group of followers, allowing Eddie to form the Powder Gangers.

Cooke took his men to Vault 19, where he plans to take advantage the local areas dangerous wildlife and the sulfur deposits beneath to arm himself with high explosives and kindle the fires of war against the Republic anew.[5][6] However, Cooke is dealing with insubordination from Philip Lem, a convict who helped with the prison break and tagged along when Cooke left but has begun to rethink his choice and now wants to leave with some others and surrender to the NCR, but Cooke will not let them.[7] causing confusion within the small group's ranks about who is actually in charge.[8]

Why Can't We Be Friends?: After killing the fire geckos, Samuel will tell you to secure the Powder Gangers alliance with the Great Khans.

The convicts and Cooke may be hostile if you have a vilified reputation with the Powder Gangers, or if you have killed Papa Khan. [verified]

Retrieved from "https://fallout.fandom.com/wiki/Samuel_Cooke?oldid=3354626"
Community content is available under CC-BY-SA unless otherwise noted.
... more about "Samuel Cooke"
RDF feed
Has platform
Playstation 3 +  and Xbox 360 +