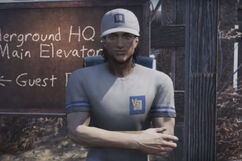 Samuel is a member of the settlers residing in Foundation in 2103.

Samuel shares that he is from a vault similar to that of the Vault 76 vault dwellers, noting its location is far away and well hidden, insisting that the residents wouldn't have heard of it.[1] He mentions that he misses living there, but is likewise glad to be free of tests subjected upon him.[2][3]

Samuel wears Vault-Tec University athletics gear and uses unique words such as "yinz," "hoagies" and "jawn."[4][5][6] Elsie Taylor notes that Samuel is one of the newer citizens of Foundation.[7] Samuel is light hearted, and enjoys playing Nuka Tapper, although expresses his frustration at losing his saved games.[8] He is also an avid lyricist, though some residents try to avoid being an audience to it.[9]

After the events of Secrets Revealed, the last quest in the Wastelanders main questline, Samuel will become available as a merchant, as Ward assigns the gold bullion exchange to him.[10]

Samuel sells rare plans. The availability of merchandise depends on one's reputation with the settlers. He only trades in

Samuel appears in Fallout 76, introduced in the Wastelanders update.

Retrieved from "https://fallout.fandom.com/wiki/Samuel_(Wastelanders)?oldid=3393422"
Community content is available under CC-BY-SA unless otherwise noted.