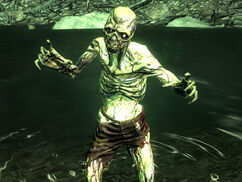 “After dark, one I believe to be the alpha male - I've called him "Samuel" - emerged with the rest of the group.”— Isabella Proud

Samuel is a feral glowing ghoul in 2277, found behind Takoma Industrial, after reading the observation files on the monitor in Isabella Proud's camp appearing in Fallout 3.

Samuel is mentioned in Isabella Proud's observation files. He is interpreted as the "alpha male" of a group of feral ghouls that were being studied by Isabella. She suspected that he was the alpha because the other ghouls were drawn to his immense radioactivity.

Despite being named, Samuel is not one of the few glowing ones who are non-hostile; he is aggressive and will attack any non ghoul on sight.

Samuel appears only in Fallout 3.

Retrieved from "https://fallout.fandom.com/wiki/Samuel_(Fallout_3)?oldid=3081258"
Community content is available under CC-BY-SA unless otherwise noted.