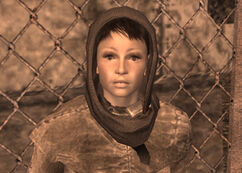 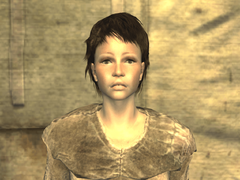 Sammy without his hat

Sammy Weathers is a capture held in Cottonwood Cove in 2281.

Sammy Weathers was captured by Caesar's Legion, along with her mother and brother, while relocating in the Mojave Wasteland. Her abusive father, Frank Weathers, fled during the attack.

When outside of dialogue with Sammy, her voice will be deeper and sound much like Cassandra Moore's voice.

Retrieved from "https://fallout.fandom.com/wiki/Sammy_Weathers?oldid=3351449"
Community content is available under CC-BY-SA unless otherwise noted.