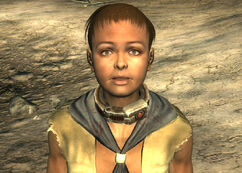 Rescue from Paradise
Bully the Bully

Sammy is a boy from Little Lamplight who was kidnapped and put into one of Paradise Falls' slave pens in 2277.

Sammy was born in 2267. He is 10 years old and is Squirrel's best friend. He's also the youngest member of Little Lamplight's scavenging team, and one of the best shots with a rifle. Unfortunately, that didn't help him when the slavers caught them unaware. He was captured together with Squirrel while on a trading run for Little Lamplight and sold to Eulogy Jones by Rip Smithy. They have been in captivity together for about a month. Sammy is really annoyed at all of Squirrel's escape attempts - mainly because he hasn't been involved in any of them. When he's not imprisoned in Paradise Falls, he watches Little Lamplight's back door, where Princess teases him for looking a little bit like a girl.[1]

Sammy appears only in Fallout 3.

Retrieved from "https://fallout.fandom.com/wiki/Sammy_(Fallout_3)?oldid=3313597"
Community content is available under CC-BY-SA unless otherwise noted.