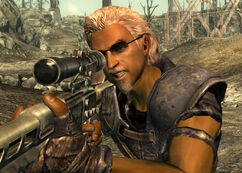 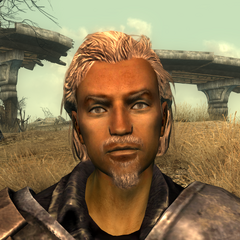 A friendly rival of Laszlo Radford's, Sam is a lone raider and a keen shot, ready to attack defenseless creatures and wandering mutations. His big plan is a high-value target that he can drop from a distance, and accrue enough caps to visit Madame over at Evergreen Mills.[1]

Sam Warrick appears only in Fallout 3.

While Warrick is mentioned as being affiliated with the raiders at Evergreen Mills in the Fallout 3 Official Game Guide, his motives and allegiances aren't so clear in-game itself. Warrick isn't in the same faction that raiders are in and will attack any raider that crosses paths with him.

Occasionally, Sam Warrick may reappear and attack the player character again despite having been killed in a previous encounter. [verified]

Retrieved from "https://fallout.fandom.com/wiki/Sam_Warrick?oldid=3185913"
Community content is available under CC-BY-SA unless otherwise noted.