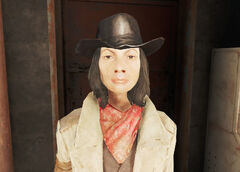 Sam Teller is a deceased character in Nuka-World's Mad Mulligan's Mine in 2287.

Sam was one of the original settlers of Nuka-World. Prior to the Nuka-World raiders' invasion of Nuka-World, Sam ran trading caravans out of Nuka-World for years. She helped lead the holdouts while making a stand in the Dry Rock Gulch area of the park, but her group was surprised by the bloodworms infesting the Mad Mulligan's Mine attraction. Her body can later be found by the Sole Survivor with a note in her inventory.

Sam Teller appears only in the Fallout 4 add-on Nuka-World.