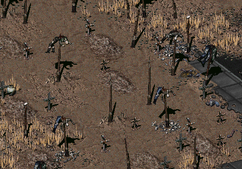 Sam Pritchard was a member of the group that made a failed attempt at breaching the defenses of the Sierra Army Depot.

Horrified at the mayhem the automated sentry turrets caused among his friends, he made his way back to New Reno. There, he drew a copy of his own map that detailed the route to the army depot and gave it to Orville Wright, dying shortly thereafter and ending up in Golgotha.

Sam Pritchard is mentioned only in Fallout 2.

Retrieved from "https://fallout.fandom.com/wiki/Sam_Pritchard?oldid=3144420"
Community content is available under CC-BY-SA unless otherwise noted.