View source
watch 24:51
Fallout Interactive Experience
Do you like this video?
Play Sound
Fallout 76 / Invaders from Beyond ally

Fallout 76
Invaders from Beyond

Tough enough
“I was thinking about what you said, about how lucky I am to be alive. And you're not wrong. But you're not entirely right. I put in work too.”

Sam Nguyen is a mechanic and potential lite ally living in Appalachia.

Sam is a handyman by trade, a musician for fun and a comedian at heart. He wishes to sit back, relax and compose music.[1] Sam being a mechanic is not his first choice of work,[2] mentioning doing things like repairing generators is needed for survival in the wasteland. For instance, he learned how to fix a furnace because he didn't want to freeze to death. He is mostly self-taught and he learns better by doing things instead of reading how to do them.[3] He works hard to stay alive and becomes slightly offended if the Vault Dweller says he is "lucky" to be alive.[4]

He has always dreamed about becoming a rock star someday, but questions the idea due to his ethnicity, saying he has never seen any Asian men being represented as rock stars on pre-War posters.[5][6] He does hope that people would focus on his music, instead of being concerned with what he looks like.[7] Sam points out that the one good thing about looking different from most people means being recognizable, unless people are trying to hunt him down for nefarious goals.[8]

His mother always said the world would end before he would get his first real gig.[9] Sam and his mother used to move around a lot, and they never had a place they called home. When he was ten years old, he met another kid at a junkyard who offered to teach Sam how to repair old radios, and together they would sell them for 50 caps a piece. After fixing it, Sam heard a song about West Virginia which made the area seem to be a wonderful place to be, making Sam want to visit it to see if the lyrics held true. Sam highly enjoyed the song, saying it was the best song he ever heard, and wondered if it meant he could "belong" there as well.[10]

He has heard a little bit about the Brotherhood of Steel, though is unsure if its name contains "steel" or "steal" as he has heard that the organization seems to swipe people's items.[11] Sam is interested in learning how to become a gardener,[12] and he also likes rainy weather.[13] He mentions having an ex-girlfriend.[14]

If the player has completed the Bucket List quest and the event One Violent Night, they can discuss their findings with Sam.

Sam Nguyen appears only in Fallout 76, introduced in the Invaders from Beyond update.

"Nguyen" is a common Vietnamese surname. 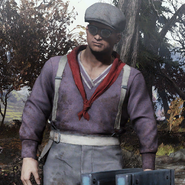 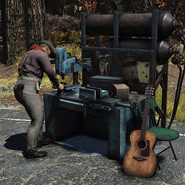 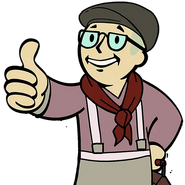