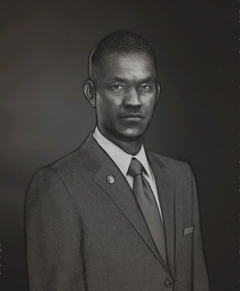 “In my time as senator, I became aware of plans made by those in power... plans of an unconscionable nature.”— Sam Blackwell

Senator Samuel "Sam" Blackwell was a United States Senator representing the Appalachian Territory in the U.S. Congress before the Great War. Very popular and winning 73% of the vote due to his pro-union stance, Blackwell also became a pivotal figure of the Free States movement, before being forced into hiding.

Blackwell started his public life as a union activist, brokering deals between disenfranchised miners and regional powerhouses like Garrahan Mining and Hornwright Industrial. His star would only continue to rise during his re-election to the United States Senate, winning with a staggering 73% of the popular vote.[1] Blackwell gained notoriety among fellow politicians for his consistent stance favoring the people, rather than the elites, and asking uncomfortable questions, like the purpose of building automated nuclear silos across Appalachia or the apparent timing discrepancies between civilian and military nuclear attack warnings - enough to be threatened with imprisonment by the powers that be more than once.[2] Blackwell was effectively a senatorial muckraker, routinely causing scuffles in committees when he pointed out conflicts of interests and exposed corruption. In one notable instance, he humiliated a fellow senator, Clark, before the Senate Committee on Nuclear Energy, when he revealed that Clark's push for lifting the ban on extracting uranium from the largest deposit in the United States (situated beneath a national park) was motivated by the stake the senator had purchased in Atomic Mining Services.[3] Unofficially, Blackwell also made inquiries into the bizarre investments made by the Department of Agriculture in Appalachia and the activities of the Department's Secretary, Thomas Eckhart.[4]

It would take Blackwell's open support of the Appalachian Free States movement, a group of local survivalists with separatist overtones before his popularity would begin to wane. But as minor scuffles between the Free States and police broke into open violence, Blackwell's support for the Free States only grew, as did calls for his resignation.[1] However, his staunch opposition to Ballot Measure 6, which would rapidly accelerate the automation of Appalachia and deprive people of jobs and income, kept him popular. However, they also made him a target for Daniel Hornwright. To eliminate the senator from the picture, Hornwright's CEO contracted a goon, a reliable fixer Harper Rosiak he's hired before, to silence the senator without killing him.[5] Rosiak's chosen avenue to achieve this was to issue threats against Blackwell's daughter, Judith, under the guise of "sticking [his] nose where it doesn't belong".[6] Convinced it was a retaliation for his investigation into Eckhart's activities, Blackwell vanished.[7] Calls to his Charleston office and home went unanswered, and Judith stopped showing up for classes at VTU. Multiple search parties were organized by police and concerned citizens, but produced no results.[1]

His last public appearance, so to speak, was in Quinn Carter's Charleston Herald interview, where he issued a damning indictment of the government and its indifference to the plight of the common man and called for Americans to find shelter away from cities while there was still time.[8] Branded as a traitor by the more jingoistic circles,[9] the senator's actions resulted in an accelerated election to replace him as the Appalachian Territory's senator and gained widespread notoriety.[10] Although his daughter stood by him, his wife, Emily, filed for divorce, granted shortly before the Great War.[11] His enemies also started digging into his life, trying to smear his name by painting him as unreliable, due to the onset of Alzheimer's disease.

After the Great War, Blackwell lived in his personal bunker (the entrance of which is disguised as an abandoned toxic waste disposal site to deter any curious explorers) together with his daughter, Judith. Although the bunker provided shelter, Blackwell's Alzheimer's started to gradually worsen without proper medication. Judith mandated that he keep a journal to keep his memory active, while she tried to stay in touch with people on the radio. She listened to endless calls for help, though no one came to save those on the radio. Sam was disheartened, realizing that few listened to his pleas for people to help each other.[12]

Though life was far from idyllic, it was safe, for a time. Blackwell still feared discovery and retaliation. When, one day, Judith failed to return from her mushroom foraging (preparing a terrifying mushroom and Dandy Boy Apple casserole), Blackwell tracked her down after cycling through foraging spots, finding her in conversation with two other men. He waited for them to leave, then confronted his daughter back at the bunker, leading to a fight between them. He was sorry about the fight, less so about the reason for it, but was still scared of losing Judy.[13]

This made his first encounter with the scorchbeasts, experienced while outside hunting, much more horrifying. He saw the scorchbeast, a monster "the size of a Corvega," looking right at him, 500 yards away, while perched on top of a ridge. He barely made it into the bunker, where Judith assumed that it might have been a hallucination caused by his deteriorating neurological state. Just to be safe, however, she also ensured her father always took the biggest gun with him when he went outside. [14] Sam was lucky enough to avoid being taken by the Scorched Plague, but his daughter was not. Judith's brush with the scorchbeast afflicted her with the plague and on February 15, 2084, his daughter died of the Scorched Plague. She died practically in his arms, right as he was preparing to carry her to the Whitespring, ready to trade his life for hers. He never got the chance.[15]

The bereaved Blackwell reconnected with the Free States at Harpers Ferry. Having disappeared so long ago, and in the aftermath of the war other matters taking precedent over a missing senator, everyone either didn't know who he was or pretended that they didn't. Raleigh Clay put him to work at the armory, cleaning weapons away from other people. However, while Blackwell's neurological state steadily worsened[16], he was far from gone. He identified an Enclave operative in town, noticing how the newcomer was staring him down. He then tracked him down outside of the town walls, as he was making a transmission to the Whitespring Bunker. Sam killed him, making it look like an animal attack with messy cuts, throwing pieces of him in the river. Although it caused a wave of fear in the town, concerned about wildlife attacking people, it did not fool the Enclave. A cloaked Vertibird passed over the town looking for him the following night. Sam fled to his shelter once it disappeared.[17]

President Thomas Eckhart, still bitter over Blackwell's involvement and investigation of his activities as Secretary of Agriculture, issued a kill order. It was rapidly a moot point for Blackwell, struggling to live on after his daughter's passing. Agent Jefferson Grey breached the outer defenses of the bunker, then the inner, finally killing the senator in his inner sanctum. However, Blackwell had the last laugh: Grey reset power for the security systems to gain entry, which meant resetting the lures as well. Grey was ripped apart by deathclaws the moment he stepped out into the outer caverns.[18]

Sam Blackwell is mentioned only in Fallout 76.

Retrieved from "https://fallout.fandom.com/wiki/Sam_Blackwell?oldid=3408641"
Community content is available under CC-BY-SA unless otherwise noted.