Track down Pretty Boy Lloyd, recover the stolen money, and make an... example of him
Go visit Renesco the Rocketman and collect Mr. Salvatore's tribute of $1000
Help guard a secret transaction taking place in the desert
Assassinate Boss Salvatore for Big Jesus Mordino

Salvatore's Bar is an establishment on Second Street in New Reno.

On the upper floor of the bar, Mr. Louis Salvatore resides, brooding and plotting against the other crime families of New Reno. Access to him is strictly limited, controlled by the mighty Mason.

The location is mentioned in the The Vault Dweller's Official Cookbook.[1]

Sometimes when first entering the second level of the bar, there will be no floor texture visible. Leaving and re-entering will render everything, including the player character invisible. Luckily, this does not prevent interaction with NPCs and objects. Initiating combat will highlight all characters as normal.[verified] 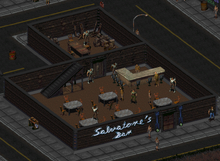 The ground floor and bar 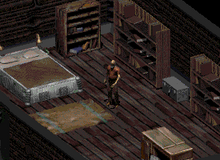