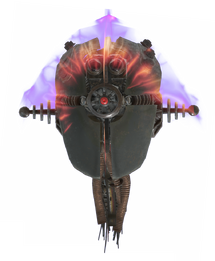 The salvaged assaultron head is a weapon in the Fallout 4 add-on Automatron.

The salvaged assaultron head is a unique pistol-type energy weapon that, as the name suggests, consists of little more than the severed head of an assaultron converted into a powerful hand-held laser gun. It lacks a proper grip, having the Sole Survivor hold the weapon by the spine and neck cabling.

Unlike an assaultron's head laser, which fires a continuous laser beam for a few seconds, the severed head only emits a single pulse and deals significantly less damage.

Similar to the laser musket, it must be charged before firing by manually reloading the weapon. This can be done up to five times for each shot, increasing the damage with each extra charge. Firing it in V.A.T.S. will also default to one charge when unloaded, but the head can be manually charged to the desired level prior to V.A.T.S. with no additional action point cost.

Unlike the laser musket, charging the assaultron head involves no visible action by the shooter. However, the faceplates open and the weapon glows a brighter shade of red as it is charged. Unsurprisingly, the animations of the weapon are nearly identical to those of live assaultrons when charging their head laser weapon.

The salvaged assaultron head is unique in that it is the only energy weapon in the game that directly injures the shooter as well as their target. Every time the assaultron head is fired, it inflicts 50 points of radiation damage on its user regardless of the charge level. This irradiation is affected by any Radiation Resistance the user has. If not monitored carefully in battle, using the assaultron head can kill the player character even faster than it does their targets as the radiation adds up rapidly especially in V.A.T.S. When unprotected, it takes 20 shots to reach fatal levels from full health.

Found in a large chest shortly before exiting Fort Hagen hangar, after the fight against Ivey.

If used in correlation with the Ghoulish perk, this weapon can be an effective way to dish out heavy damage and restore an average amount of health.

Retrieved from "https://fallout.fandom.com/wiki/Salvaged_assaultron_head_(Automatron)?oldid=3181339"
Community content is available under CC-BY-SA unless otherwise noted.