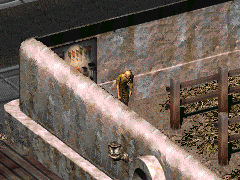 “It was a great big door, like them kinds you see in the old video flics. Big and made o' steel. An on it was carved a great, big 13!”

Saltbeef Bob is an old, grubby man with stringy hair, about three teeth, and a face criss-crossed with the little veins.[1]. He is a drunkard that works on Roger Westin's ranch as a helper and cook. He ended up with that job after a rather bad encounter in the desert. After fighting starvation and heat, he managed to crawl into a cave and find his mother lode, Vault 13... or so he thought, as after he staggered back into NCR, his map to Vault 13 was stolen from him.

Since then, he has resided on the ranch, drinking profusely and constantly nagging people to respect their elders. He also plays a minor part in the quest Retrieve the GECK for Arroyo.

Saltbeef Bob appears only in Fallout 2.

Retrieved from "https://fallout.fandom.com/wiki/Saltbeef_Bob?oldid=3073249"
Community content is available under CC-BY-SA unless otherwise noted.