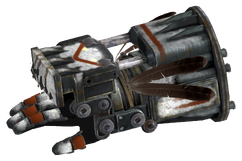 Slayer
(+0.4)
“It's said there's no man deadlier at close range, that that powerfist of his has smashed a hundred skulls.”— Daniel

A unique power fist belonging to Salt-Upon-Wounds. It is a power fist that has been painted white along with orange marks. Four identical feathers are attached to the wrist by a leather strip. Attached to the front of the glove is a deposit of salt, somehow being held together by duct tape. Its name is appropriate since the fist damages the enemy by 3 HP over ten seconds after every hit, as if salt is being rubbed upon their wounds. It also has the effect of making them dizzy for a few seconds. This weapon is an improved holdout weapon requiring a Sneak skill of 50 to conceal.

Salt-Upon-Wounds' power fist can successfully strike about 495 times from full condition before breaking.