Blue
“He is war chief of the White Legs, and the worst butcher of them all. The tribes he has crushed are many. The warriors he has slain, countless.”— Waking Cloud

Salt-Upon-Wounds is the war chief of the White Legs tribe and destroyer of New Canaan, living in Zion Canyon in 2281. He is the most dominant individual within the tribe, responsible for the initiation of the tribe into Caesar's Legion and the pursuit of the New Canaanites from their homeland. He serves as the primary antagonist of Honest Hearts.

Salt-Upon-Wounds is a harsh, merciless leader infamous among the inhabitants of Zion Valley for his cruelty as well as his prowess in hand-to-hand combat. He is well known for personally leading his warriors into battle, and is described as having killed hundreds enemies with his power fist.[1][2] When Salt-Upon-Wounds took New Canaan, he ordered the White Legs to salt the earth so nothing could grow again.[3] nailing the corpses to a nearby cliff.[4] This "salt-the-earth" policy of conquest and destruction eventually made its way to Zion Valley, seeking to progressively transform Zion National Park into another polluted piece of wasteland.

If Salt-Upon-Wounds is spared and subsequently escapes, he is "a dim shadow of his former self," and is unable to prevent his people from being destroyed by their enemies soon after retreating from Zion.[6] 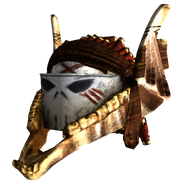 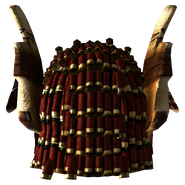