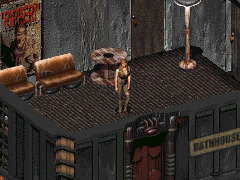 “My name's Sally Dunton, but mostly they call me Big Nose Sally. I'm the owner of this here bathhouse. We have a whole hassleful of special, attended baths for you to pick from.”

"Big Nose" Sally Dunton is the proprietor of Klamath's Bathhouse in 2241.

A plump, older woman with a large nose[1], Big Nose Sally is the mother of the Dunton brothers, Buck and Chuck, running the Klamath Bathhouse. She is a stern lady with a business sense that manages the establishment with a steady hand and personally clears customers. She is known for taking care of the Bathhouse workers.

The Chosen One can get a bath at Sally's bathhouse but not much else. Should anything happen to her sons, she will respond in a hostile manner.

Sally Dunton appears only in Fallout 2.

Retrieved from "https://fallout.fandom.com/wiki/Sally_Dunton?oldid=3270753"
Community content is available under CC-BY-SA unless otherwise noted.