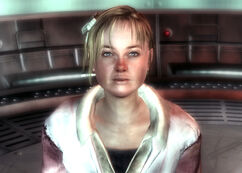 Sally is a child abductee aboard Mothership Zeta in the year 2277.

Sally and her sister were abducted shortly after the Great War, making her over two hundred years old. Her parents were killed almost immediately after the war. After the abduction, the girls were separated, and Sally never learned that her sister died during one of the aliens' many experiments.

Now a fixture in the lower levels of Zeta, Sally has repeatedly escaped custody and explored a fairly large portion of the ship's lower level. She has a degree of insight into the workings of the mothership and the motives of the aliens that nobody else possesses. Sally also offers random alien items once every few hours, should the Lone Wanderer request them.[1]

Not of This World/Among the Stars/This Galaxy Ain't Big Enough...: Sally assists the Lone Wanderer throughout the Mothership Zeta quests by using her skills to open doors or to provide information as they move through the ship.

Sally appears only in the Fallout 3 add-on Mothership Zeta.

Retrieved from "https://fallout.fandom.com/wiki/Sally_(Mothership_Zeta)?oldid=3129786"
Community content is available under CC-BY-SA unless otherwise noted.