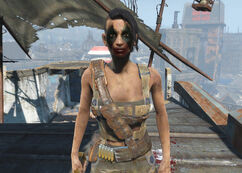 Captain Sally is a raider leader in the Commonwealth in 2287.

Captain Sally is the sixth and final target in the To the Mattresses missions, where Railroad leader Desdemona has given the Sole Survivor the assignment to eliminate members of the L&L Gang, which targets and murders synths. Sally can be found together with Johnny T. Walters at a radiant location.

Captain Sally appears only in Fallout 4.

Retrieved from "https://fallout.fandom.com/wiki/Sally_(Fallout_4)?oldid=3172060"
Community content is available under CC-BY-SA unless otherwise noted.