Salisbury Steak is a consumable item in Fallout 4.

Saddle Up Salisbury Steaks are found in branded split-tone boxes that heal 30 Hit Points and add 9 rads upon consumption. The box pictures a meal that appears to consist of a Salisbury steak patty covered in brown gravy with two sides, corn on the cob and peas. The back of the package has a nutrition information panel on the left side and four lines of text in the lower right corner, both of which are illegible. 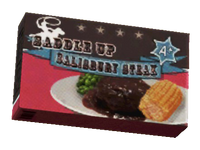