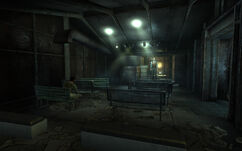 “She is the patron saint of lost children. Very popular among the faithful of Rivet City. I`m surprised you've never heard of her. If you want to hear her story, it will be the topic of my sermon on Sunday. Services begin at 8 am. You should come.”— Father Clifford

Saint Monica's Church is a Catholic church in Rivet City, run by Father Clifford and his acolyte Diego. The church is one of the few that can be found in the wasteland, as many standing churches were destroyed or abandoned following the Great War.

Father Clifford tells the story of Saint Monica as follows:

“Today we hear the story of Saint Monica. She was born in Great Lanta on the shores of the ocean. Her parents were both ghouls. That's right; I said ghouls. That she was conceived at all was a miracle. That she was born unafflicted was an even greater miracle. God tested Saint Monica. She did not lead an easy life. Sold into slavery by raiders, she was forced to sell her body. They took her only son, Ehren, from her and sold him. She prayed every night to God for his safety. She did not pray for herself, although her burden was great. Each night she would preach the word of God to the slavers. After sixteen years, God provided a miracle. One of the slavers repented his wicked ways and helped her to escape. Four years she looked for Ehran. Four years she wandered the wasteland. God looked over her in those years. When she found her son, she found he was a wicked man. Ehren had overthrown his masters and taken their place. He was an owner of men. Ehren took his mother to be his slave, even knowing who she was, for Ehren blamed her for his painful early life. Each day Ehren would think of a new and wicked trial to put her through. She would only smile at him and say, 'I forgive you.' Each morning she would be miraculously healed as if nothing had happened. When Ehren truly realized her love and God's love was boundless, he flung himself at her feet and begged for Saint Monica's forgiveness. Ehren released all of his slaves, and they rejoiced. He repented all his wicked ways.”

The church is located on the midship deck. It is a medium sized rectangular room with several rows of pews made from old benches and a podium at the front where Father Clifford gives his sermons. There is also a small room at the back of the church which serves as Father Clifford's personal quarters, and both he and Diego reside there. The door to this room is locked with a Very Easy lock.

St. Monica is based on the real world saint of the same name.

Retrieved from "https://fallout.fandom.com/wiki/Saint_Monica%27s_Church?oldid=3416801"
Community content is available under CC-BY-SA unless otherwise noted.