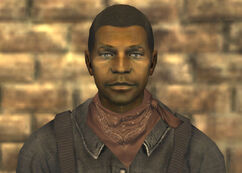 “That's private. I don't go asking about how you like to get laid, and I don't wanna know. Enough of that.”

Saint James is a slaver living in Westside in 2281. Together with his partner Dermot, they have been kidnapping and selling women and children into sexual slavery to the Fiends after they murder the father and occasionally the sons depending on their age.

A devil wearing the name of a saint, James used to work as a prospector scavenging around New Vegas, but has turned to slavery, with his partner Dermot, selling refugees (mostly young women) as slaves to the Fiends. While he is a deeply disturbed individual, suffering from many social anxieties (especially those related to women),[1] nor particularly bright,[2] he is the perfect type for slaving, as his partner notes. On top of his psychosis, he is an active pedophile, only kept manageable by a teddy bear from a little blonde girl that they kidnapped and Dermot bribed him with to keep him away from the "merchandise."[3][4] However, keeping himself from molesting children isn't the only thing he uses his teddy bear for, as it's been a regular accessory to his sessions with his favorite prostitute, Sweetie.[5] According to Sweetie, James requires her to not talk and lay perfectly still during intercourse and lately has been including the teddy bear to prop on the bed to "watch." Sweetie describes this behavior as "creepy" but not the worst she's dealt with and just bit "perverted."[6]

Captain Parker suspects that the bear originally belonged to a little girl that went missing from Aerotech Office Park, but admits that a teddy bear is merely tentative evidence at best.[7] However, if combined with Dermot's ledger, the evidence is more than enough to bring both Saint James and Dermot in.[8]