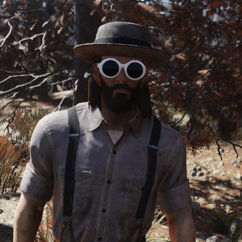 Sage is a friend of Beckett in Appalachia in 2103.

According to Beckett, Sage was a violent murderer and thief until he became addicted to chems, which led to huge changes in his mentality and a penchant for joining various cults.[1] These cults included one which worshipped Tatos and one which believed that everyone lived inside a terminal or AI program.[2] None of his stays have lasted more than a month before Beckett is forced to bail him out.[3] Most recently, he has fallen in with the Cult of the Mothman and once again needs rescue.

He has a habit of running off, but mysteriously still finds his way to where he is needed,[4] even being able to reach Beckett simply upon his name being called for a length of time.[5] Despite his constantly addled state, he is surprisingly perceptive and knowledgeable, although his words often come off as muddled.[6] In addition to his own cryptic wisdom, Sage also is familiar with many others who "see and hear things differently," which provides him with additional potential insight.[7]

Sage appears only in Fallout 76, introduced in the Wastelanders update.

Retrieved from "https://fallout.fandom.com/wiki/Sage?oldid=3430177"
Community content is available under CC-BY-SA unless otherwise noted.