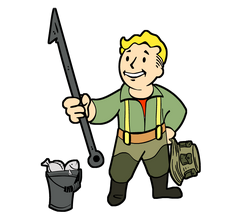 Safe Passage is a quest in the Fallout 4 add-on Far Harbor.

Talking to Captain Avery in Far Harbor, once arriving at Acadia, she says that she sent out a man, Howard Dunbar, to fix the fog condensers en route to their water supply, but he hasn't returned and they're running out of water. She tasks the Sole Survivor for finding Howard and, if one finds him dead, repairing the condensers.

Venturing out of the town a ways and into the ruined buildings, near Beaver Creek Lanes, the player character finds Howard's corpse surrounded by 2 mirelurks. Kill them and loot Howard's corpse, then pick up the 3 power modules.

From here, the player character is given 3 waypoints, gradually further down the nearby road and up the hill. Each waypoint points to a fog condenser. Approach each one and activate it to repair it and remove the nearby fog. At the top of the hill, upon repairing the third condenser, 2 more mirelurks will spawn. Return to Captain Avery, where one can pass 3 increasingly harder speech checks to increase caps reward.

Retrieved from "https://fallout.fandom.com/wiki/Safe_Passage?oldid=3373540"
Community content is available under CC-BY-SA unless otherwise noted.